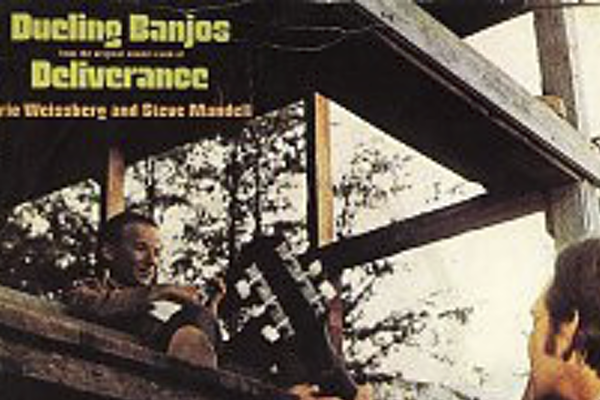 Eric Weissberg recently passed. He touched our lives with “Dueling Banjos,” a recording that could serve as an allegory for national unity.

“Dueling Banjos” was a collaboration with Steve Mandell for the 1972 film Deliverance. The two musicians did not act in the film, but their music was dubbed into the story.

In that mesmerizing scene of the film, in which some city slickers make a fuel stop at a hillbilly gas station, the impromptu music performance occurs.

Like the scene itself, with the clash of cultures, the music composition is binary, suggesting rigid boundaries of difference. The music seems quite characteristic of our nation’s polarization, its extremism, dogmatism, and tribalism. “Feudin’ Banjos” was the piece’s original name, but it could have been titled “Red State, Blue State.”

Yet in this musical dialogue is organic harmony, perhaps due to the embedded “Yankee Doodle” chords. Though the players are staunchly competitive, the music has an underlying unity. Afterwards the banjo player refuses to shake the hand of the outsider who had played with him, but they nonetheless had a magical moment.

In keeping with capitalism, but more so American generosity of spirit, at the end of the scene one of the spectators thinks the young and squinty autistic banjo player is deserving of “a couple of bucks.”

After the spontaneous playing, the interloper utters God’s name in superficial profaneness. In actuality, the “Dueling Banjos” piece is a call-and-response, borrowing from a custom of old-time religion. Similarly, much of our culture is embedded with contested moralism, hence the culture wars.

In our collective imagination the banjo comes across as Americana. When we think of that stringed instrument, white country folk playing bluegrass music come to mind. In fact, the banjo was brought over by the slaves who endured the awful “middle passage” and no doubt kept some of their dignity through their love of music. Cultural appropriation or not, the banjo is intertwined in our national narrative with all of its good and bad.

Mr. Weissberg was a Brooklyn boy and by age eight started receiving banjo lessons from Peter Seeger, a staunch lefty who had ties with another lefty, Woody Guthrie of Oklahoma. The folk music tradition, interwoven with country music, has often had a progressive vision, a perspective some have forgotten.

In 1973 the Weissberg/Mandell “Dueling Banjos” appealed in a crossover way, reaching number two on the pop Top 40, number five on the country billboard, and number one on the adult contemporary chart. The following year it won a Grammy. The sound continues to reverberate in our national psyche as an American classic. A YouTube video of that famous scene in Deliverance has had nearly 30 million views and we can guess that it has been enjoyed by conservative and liberal alike.

If we could consider our differences as not warfare but call-and-response, perhaps we could find some harmony in the song of our nation. Next to the borough where Mr. Weissberg was born is Queens, where our current president is from. Mr. Trump has fashioned a political identity by plucking chords of anger and rage, but maybe during this time of COVID-19 he could listen attentively to all of our strumming and picking in order to hear the larger America of which his MAGA base is only one component.